Home » Love on the clock: Brad and Janet Ritter »

Love on the clock: Brad and Janet Ritter 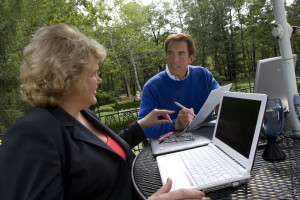 Love may be a many splendored thing, but would or could you go into business with your spouse? Couples running businesses together is certainly not a new concept, although statistics outlining just how prevalent it is seem to be nonexistent. The Census Bureau, for instance, gathers data about family-owned businesses, but doesn’t break it out into husband-and-wife teams. Columbus Business First interviewed four married couples, including the Ritters, who also spend their days working together to get a sense of what works for them and how they approach obstacles, should they arise. The couples were sent identical questionnaires, although not all the answers from the couples are reflected in each tale.

Business First: Why did you go in business together?

Janet: “No one else would hire me.”

Brad: “She’s kidding, of course. We thought it would provide a greater quality of life, which it has. We also thought we would complement each other, and as a couple, be a bit unique in the marketplace.”

What methods have you found most successful in preventing business disagreements from poisoning, or at least altering, your marriage and vice versa?

Brad: “Having clear roles that both partners embrace is important.”

What impact has being business partners had on your marriage? Conversely, how has being married impacted your business relationship? What rules have you created, if any, regarding about talking work when you’re off the clock?

Janet: “Our marriage vows included this stipulation: We must go away for our anniversary or it is grounds for divorce. Working while on vacation is also grounds for divorce. Exceptions must have Earth-shattering consequences. Hours before we departed on an anniversary trip, Brad reminded a client in Israel of his upcoming absence, reason why and backup contact. The client’s response was, ‘You have a smart wife.’ ”

What is your most useful piece of advice for married couples considering going into business together?

Brad: “Ask yourselves what each of you wants out of the business relationship.”

Janet: “When it comes to business and marriage, you can never have too generous of a benefits plan.”

What do you do for fun to get away from the office? Do you do that alone or together?

Janet: “We have to have different interests or we would die from boredom. The key is to respect those differences. For instance, Brad is a fitness buff while I avoid sweating. Likewise, I am a Disney enthusiast. When I am no longer responsible for my father’s care, Brad supports my desire to sell mouse ears at Disneyland … or maybe frozen bananas … I cannot decide. At the same time, Brad has no desire for celebrity clients, but he supports my taking classes through UCLA in entertainment public relations because so much of the Southern California business community is focused on entertainment. We need to understand what is expected when Danny Bonaduce or Flavor Flav wants to film in one of our client’s locations.”

Have you ever discussed who is responsible for which business roles? How difficult is it to maintain those roles?

Brad: “Clearly defined roles are important and ours evolved. I enjoy running the business and looking at the big picture, but when it comes to individual tasks, Janet is much more detail-oriented.”

Janet: “Brad and I have different gifts. Brad is stellar at strategy and follow-through. I love to research and write. In private, we have separate roles, too. I’m in charge of inside the house, including payment of household bills, and he’s responsible for outside the house, including car care. If either of us gets overwhelmed, the other helps out.”